News / Press Releases 02 August 2021 Hits: 160
The Silent Plus range expands with the new Silent Plus 5900H
New Silent Plus 5900H model here to replace the earlier version Silent 5400H: like the higher-power model Silent Plus 8100H, it features a new, upgraded, high efficiency diffuser, slim and with advanced technical and technological specifications.
Lugo di Ravenna (28 July 2021) - After the launch of the new Silent Plus 8100H, TELECO/TELAIR now presents a lower-power model: Silent Plus 5900H. The latest addition to the range, suitable for compact sized campers and caravans measuring from 5 to 6.5 metres, also stands out for the modern design of its diffuser, ultra-flat with integrated lighting and intelligent display. Equipped with a heat pump, Silent Plus 5900H has a maximum cooling power of 5900 BTU (1730 W), while the heating power reaches 5600 BTU (1640 W). The
new diffuser optimises forced ventilation and increases the air flow up to 450 m3/hour, without, however, any impact on the operating noise. Silent Plus 5900H, which replaces the earlier Silent 5400H model, is designed for installation as is customary in the 40x40 rooflight apertures and has one of its strong points in the dimensions of its internal diffuser: a footprint of just 45 x 45 cm and a thickness of just 4.2 cm. The size of the diffuser has therefore been significantly reduced, enhancing internal ergonomics. An environment-friendly air conditioner, which uses R32 refrigerant gas, and is fully controllable from the TELECO APP, thanks to our TELECO HUB.
“We are very pleased with the evolution of our Silent range into Silent Plus. The new diffuser is similar to the one used in the Evan series, but redesigned to suit Silent Plus characteristics”, says Raul Fabbri, co-founder of the Teleco Group. “The display is much more complete and shows information on both the temperature setting and the room temperature. We have added the ventilation function, which was not there before. We also added side lights, which provide extra interior lighting to be controlled remotely by a remote control. This new model completes the TELECO/TELAIR series of air conditioners: we can now offer a range of powers starting from e-VAN 5400H up to DualClima12500H through Silent Plus 5900H, e-VAN 7400H, Silent Plus 8100H and DualClima 8400H. In other words, we can offer ideally sized air conditioning for compact camper vans under 5 metres to maxi Premium class, over 10 metres motorhomes."
The TELAIR Silent Plus range will be officially presented to the public at the caravanning sector trade fairs scheduled from September: Caravan Salon in Düsseldorf, Salone del Camper in Parma, Salon des Véhicules de Loisirs in Paris, Kampeer & Caravan Jaarbeurs in Utrecht, and Suisse Caravan Salon in Bern. 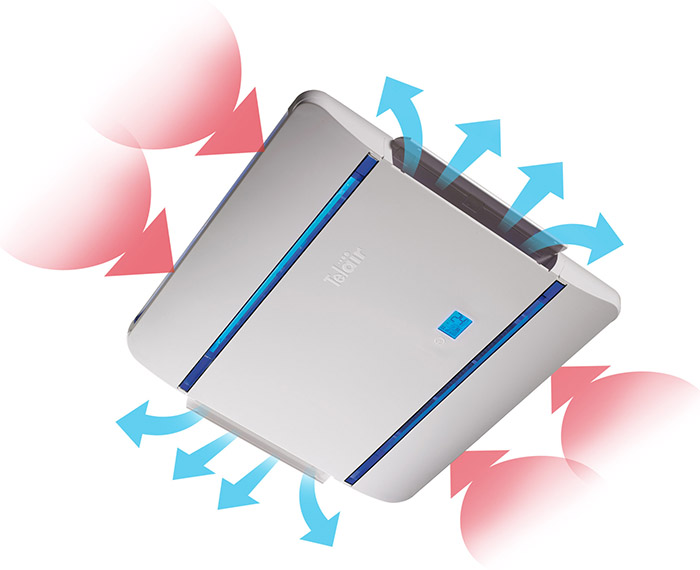