News / Press Releases 28 March 2022 Hits: 39
The Teleco Group company presents two solutions that ensure energy is readily available, any time, anywhere. Based on lithium-iron-phosphate ion (LiFePO4) batteries that can also be charged with solar panels, they provide 460 Wh or 1110 Wh, supplied as 12V DC or via USB as 220V AC.

Lugo di Ravenna (March 28, 2022) - Energy wherever you need it. Teleco Group presents its new Telair-brand Portable Power Stations, designed to ensure you always have all the energy you need with you. Featuring lithium-iron-phosphate (LiFePO4) batteries, the two stations can power loads of various kinds, with the PPS500 model offering 460 Wh and the PPS1000 offering 1110 Wh. In comparison to values normally seen on recreational vehicles, this means 38Ah and 93Ah respectively at 12 Volts. In alternating current, the smaller model guarantees up to 500 Watts of power, while the larger one provides 1000 W and can reach a peak
power of 2000 W.

Whether camping, in a car, in a van, setting up an outdoor party, a stall at a market or fair, powering an offgrid mountain hut or beach hut, Telair’s Portable Power Station offers a versatile way to supply the required energy. A pure sine wave inverter lets you power, risk-free, devices equipped with electric motors and electronic devices, while the presence of the 12 Volt/8A output is suitable for all ‘generic’ use thanks to the cigar lighter-type socket on the PPS1000 and a similar adapter supplied with the PPS500.

The USB and USB-C outputs have different characteristics depending on the product. On the smaller Portable Power Station there are four standard outputs (5V at 2.1 amps); the larger model, instead, has two standard outputs and a Quick Charge 3.0 one. The latter lets you charge at a voltage of 5, 9 or 12 Volts, at respective currents of 3, 2 or 1.5 amperes. USB-C ports are also model-specific: 5V/3A on the basic model, 60 Watts of power at 5, 9, 12, 15 or 20 Volts (always at 3 amps) on the more powerful one.

Thanks to the integrated charge controller, Telair Portable Power Stations can be charged from a normal 230 V mains source (via external power adapter), a 12V cigar lighter socket or a solar panel. The PPS500 model shows the current battery charge via a series of LEDs, while the PPS1000 features a user-friendly display that illustrates system status and highlights the outputs in use.

Operating temperatures range from -20 (-10 for the PPS1000) to +60 °C, ensuring the power station can cope with the most extreme weather. To prevent any overheating, a forced-ventilation system comes on automatically as needed. Both solutions are protected against overloads, short circuits, overheating and excessive charging or discharging.

Telair's Portable Power Stations are the outcome of Teleco Group's unrivalled experience in the field of lithiumiron- phosphate ion (LiFePO4) batteries for recreational vehicles. The company has, in fact, provided 100, 160 and 200Ah batteries for some time. In terms of the basic technology, the only substantial difference between the TLI Extra and TLI Extra PRO with respect to the Portable Power Stations is the shape of the cells used to make the battery: prismatic instead of cylindrical. Another key TLI Extra and TLI Extra PRO battery feature is the ultra-low failure rate: ever since they were added to the Teleco Group range, only about one product in a thousand has ever been returned to the assistance service. 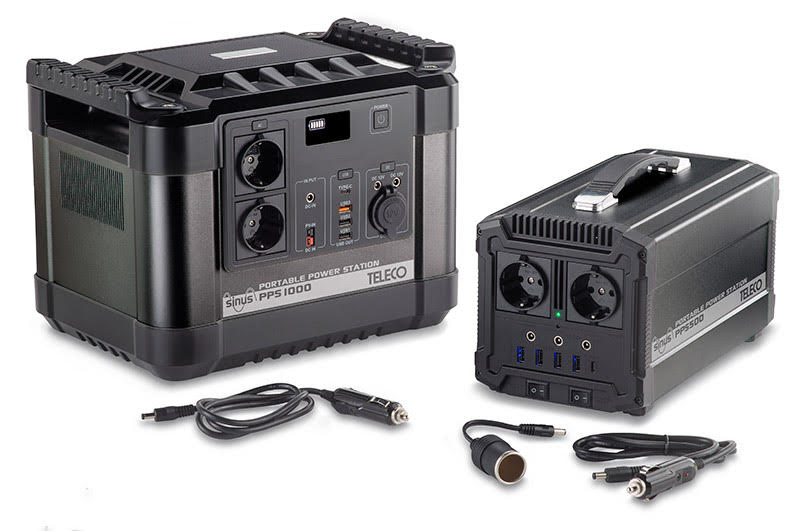